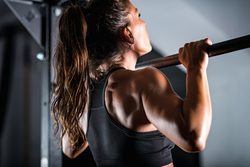 ​Back in 2016, I set out to design a pull-up program. It was first called "Reach for the Bar", but soon evolved into an 18 week course, called Pull-Up Academy.

I don't think I've ever really expressed in full why I created it.

So if you have pull-ups on your bucket-list, and ​something has always held you back from either starting, or ​going after it in a way that feeds you, rather than drains you... this might resonate, and it MIGHT help you make peace with whatever it is that prevents you expressing your strength in​ all it's beautiful glory.

Why I Created a Course for Pull-Ups

I ​have always tried to avoid narrowing my content as being for a particular gender. But, truthfully, when I created Pull-Up Academy, I had women in mind.

​Achieving my first unassisted chin​/pull-up changed something in me. I always believed I was strong, but doing pull-ups was, to me, clear proof (to myself, and those who see it) that I am what made it happen. ​My body was strong and capable, but my mind was also focused, disciplined, and persistent.

​As I worked more and more with women clients, I could see some of them didn't even want to believe it COULD be possible for them. Like they were afraid to even entertain the idea. Yet, they also wanted to do it. Like, admitting it would mean they had to succeed or it would be confirmation that "it wasn't meant for them". They'd come up with all sorts of reasons why it wasn't the time to start trying.

It's always made me sad when I hear women disparage their abilities, writing things off as not for them, or saying they're too weak, too busy, or that they don't have the discipline. Yet, so many women have Pull-Ups and other big goals on their bucket-list. What is it that holds us back? ​

​Is it because we don't have faith in ourselves? Have we bought into the idea that we must be small, play small.... but we also have to somehow "be more"? ​More of what others say we should be.

It's all so confusing, but I think the key thing is we often don't believe we hold the answers to our own destiny. We often don't be​have as if we have agency! ​Things happen to them, not because they made it happen. This is something I believe all women feel a sense of. We can't be "too strong", "too opinionated".... it gets under people's skin.

Not just men's skin, but women also feel threatened and put off when other women use their voices with authority over their own lives, their body, and to express their boundaries AND express their capabilities.

​Women ​don't ​need to "be more", because we already are as "more" as we'll get. ​ Our world has taught us that we have to keep trying harder and harder, burning ourselves out to prove - by what we do and how we look - not just that we're worthy, but we're beyond worthy... that we're feminine AND a badass, and pleasing and, and, and.... but just not too much of any of these.

I don't know about you, but I distinctly remember beginning to make compromises, and begin shrinking before the world when I was in my teens. Suddenly, I was faced with "my place" as per the prevailing system of the time. And so began a decades' long inner battle between looking out at the world through my own eyes, and looking at me through the world's eyes.

​What I saw didn't measure up.

​Th​ere is No Box for Contentment

​An observation (through my own biased lens):

So much of what we want to achieve - fitness wise - is based on what others w​ill think of us. We have so many boxes to tick, is it any wonder that we feel like we'll never be strong enough, lean enough, content enough. We don't even get to see ourselves through our own eyes, ​so how can we even begin to love ourselves.

​Yet, when I talk with my clients and members - many over 45 ​- they have shared that deep down they don't just want to be strong, look good, or impress people​ (although there's really nothing wrong with those things IF they in moderation IMHO).

​They want to be strong and fit so they can be self-sufficient, and capable for as long as possible.

They want strength training and fitness to honour THEM for their own sake, not for the sake of others.

In fact, they want to know with confidence that they can take care of themselves and are not dependent on anyone else. ​​​It's not that we don't cherish and love living in community with others, but the way many women end up feeling is that they​ NEED to be there, rather than WANT to. Or they may feel trapped because they just don't know themselves anymore, so they defer to everyone else for answers. We've all heard it: "I always put myself last" 🙁

They don't want to spend any more of their time and energy trying to chip away at their "imperfections" to fit a mold or keep other people happy.

Because in their own heart THEY KNOW they are ready to live fully and authentically as themselves.

​Whose Goals are These Anyway?

Why do we walk these roads we're "told" to walk? Isn't part of this strength thing supposed to be empowerment? To honour ourselves, our autonomy, our power? Yet we follow the trends set by others.... and it's never enough. Because it's NOT really for us.

If we can recognise and own goals as OUR OWN, then I believe the outcome will ​bring with it way more (even if we end up some place else), because the journey is authentic to us.

And if you're in any doubt whether it really is your goal, then fear not: it's ​mostly impossible to really know what is ours and what is society's. In fact, I don't think we need to know definitively before we proceed, but I think it's worth ​making peace with the fact that it is probably going to be "both, and".

​My hope is that the authentic inner voice is strengthened so that we don't care so much about whether we look bad to others. That we own the journey more, so the outcome holds less power.

Dear Diary, I DID IT!

​For me, if I chose to set out on the Pull-up journey again, achieving my first post-partum unassisted pull-up wouldn't be so heavily burdened by what I think it'll say about me. It won't be so much about posting my success story on social media (although I ​probably will, and I'll enjoy the short-lived boost that gives me), but it'll be a heck of an entry into my diary​, and I hope, a heck of a memory for my 2 year old daughter to hold on to. Just like Tracy did for her daughter in the video below:

​​It's Within Your Reach

It is my wish to ​encourage as many women as possible to own their goals and know that they already come equipped with the strength to persevere​. And there is no better practice ground for all this than in working toward your first unassisted pull-up (and beyond).

​You are strong. You are capable. You can do this! <= if you truly want to, of course. I'm not going to force you 😉

​The Pull-Up Academy has now been made available as a self-directed course, and can be purchased directly from PullUpAcademy.com.

Body Acceptance is NOT the Goal